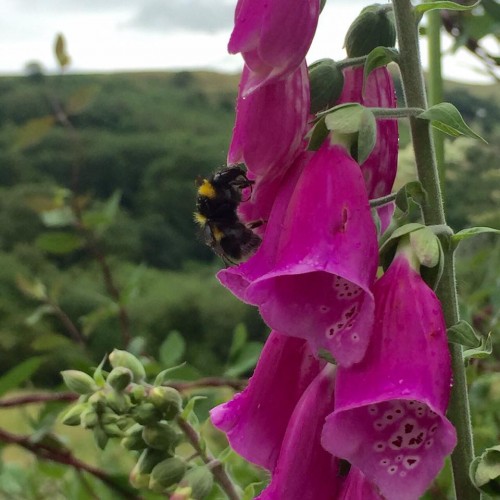 What a good year for foxgloves.

They take a full two years to reach flowering…and as you’ll know the aim of all flowers is to attract insects which pass on pollen to fertilise others. Through evolution, different flowers have developed expertly to attract specific pollenating insects from tiny wasps and flies to the bees. Bumblebees are the targets for the foxglove…inviting, perfectly bee-sized tubular flowers with visually stimulating spots on the landing lip.

The scientific name of the plant is Digitalis (fitting perfectly on human fingers – digits) and its chemical make-up is a useful drug, still used today, to regulate heartbeat. But BEWARE as it’s a dangerous poison so don’t go chewing clumps (as if).

They say the name foxglove is nothing to do with foxes by the way. It’s a derivation of ‘folks-glove’ with ‘folks’ referring to fairy folks which were thought to hang out in the countryside in the Middle Ages.

Whoa…what’s that rustling in the grass!