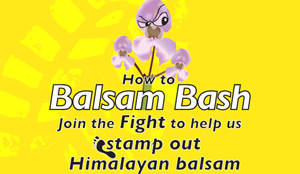 Himalayan Balsam colonises areas rapidly and quickly outcompetes the surrounding vegetation and reduces diversity. Himalayan Balsam is an annual plant; growing from seed, flowering and setting seed within a year before dying. All Himalayan balsam plants germinate from the previous years seed. Annual plants do not have the need for extensive root systems. Himalayan Balsam grows very rapidly which necessitates readily available access to soil moisture which is why it has colonised river banks which have an abundance of moisture and nutrients. This causes a problem because Himalayan Balsam does not have an extensive root system and it is crowding out perennial plants that bind the river banks with their root systems. During flood events the river banks are then vulnerable to floodwater because of the lack of perennial plants. There are also claims that the height of the plant causes a problem by restricting the flow of the river. It is, however, a good nectar plant for bees and wasps in late summer.

If you want to help reclaim the Torrs Riverside Park, the Picker and Mousley Bottom from Himalayan Balsam then please join one of these sessions.

Everyone who attends will be entered into the raffle for coffee and cake for 4, and other prizes.