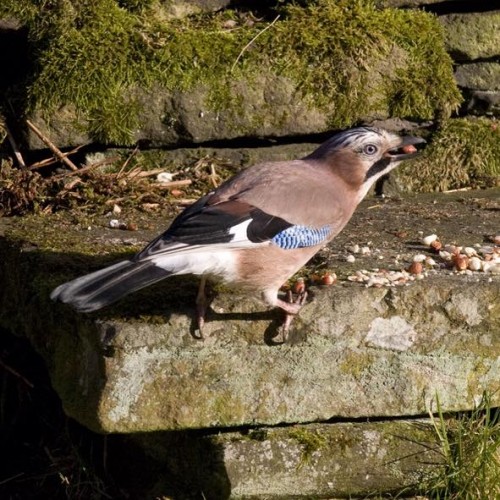 We were visited by a pair of these beauties the other day, collecting peanuts (they can hold up to a dozen in their gullet at one time) to store in hidey holes.

You’re most likely to see them in the autumn when they’re busy collecting their favourite food, acorns, and burying them for winter use…Jays are responsible for many of our oak trees because they miss collecting the odd one or two.

They’re a secretive and timid woodland bird, a member of the crow family, with a swooping, dipping flight (not unlike that of a woodpecker) and a harsh, unmusical squaak of a call.

Flying off, you’re likely to see the black tail and bright white rump…the beautiful blue flashes on the wings only become evident at close range.

They do have less tasteful habits too…they’re not averse to eating other birds’ chicks and eggs in springtime.