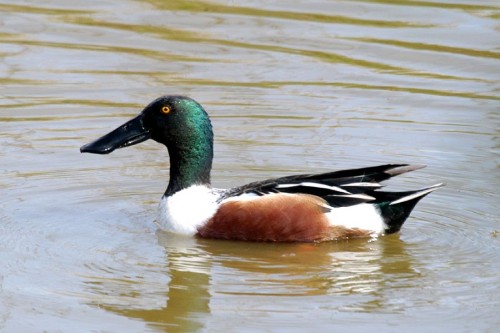 It’s an odd time of year this..feels as though Winter is over but Spring hasn’t quite peeped round the corner; everything is on the point of happening.
Yesterday a friend texted to say he’d been down to Waterside meadows as there were some interesting things to see. Having a wander down there (somewhere I must admit I don’t often get to) the woodland floor is packed with wild garlic, otherwise known as ransoms, and lesser celandine flourishes in the damp shade.
Waterside couldn’t be better named. The whole area is very watery and the flooded fields here have become an almost permanent feature which must be a pain for the local householders. But some things take advantage of these flooded meadows which bring worms, grubs and other creatures to the surface providing much needed protein after winter.
There are a number of pairs of lapwings down there at the moment, arguing for land rights. Lapwings are, strictly speaking, waders and generally prefer damp fields for bringing up their families so Waterside is ideal. I always find them a joyful bird to see and hear; they used to be much more numerous as you’ll probably know. However what really brought me down here was the sight of a much less frequent bird for New Mills, a shoveler duck.
Some ducks dive beneath the surface: tufted ducks for example (small black ducks with a handsome crest and big white body panel). See them on the ponds along Strines Road. Others are dabblers and the shoveler duck is one of these, well equipped for filtering the mud it dabbles through to extract small creatures and algae that feed it. Shovelers look a bit like a duck drawing that went wrong. The bill appears much too cumbersome for its body but it’s clearly a useful tool.

Another week or two should see Spring well and truly upon us, I must get down to Waterside more often.

Waterside is very accessible and can form part of a walk from New Mills Heritage Centre.