A couple of years ago we were walking along the river… not sure which one it is…between Hathersage and Grindleford and got talking to a couple who’d come up from Sussex looking for dippers (without any luck) because you don’t get them in the south-east.

I didn’t say anything but they’d have been better sitting in the Torrs.

The dipper, a plump, starling-sized bird, blackish-brown with a large white breast is a bird of fast flowing streams and rivers and is a charming creature which you’ll regularly see whirring upstream giving its double-note call. 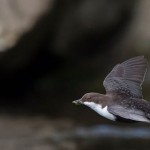 Dippers feed exclusively on insect larvae and freshwater shrimps which live under the water and beneath rocks on the stream bed, and it’s because this food is around all year that dippers are with us summer and winter. The particularly interesting thing about dippers is the unique way they hunt out their prey: facing upstream. they enter the water from a rock at the waterside, walking underwater along the bottom and using the waterflow to hold them down as they disturb the pebbles to dislodge any critters hiding beneath. It’s a fascinating thing to watch and definitely worth the wait.

Sitting on a rock the dipper has the habit of bobbing its body up and down (nobody is quite sure why), and it’s this, together with their underwatery habits that gives it its name.
Listen for the dipper’s surprisingly musical song too (not unlike that of a summer warbler) to announce its territory and warn others off.

Most upland streams round here support a few pairs, particularly the Sett along its valley and in the Torrs, and it’s worth bearing in mind that not too many years ago, there was too much pollution in our rivers to support much insect life…and dipper life.