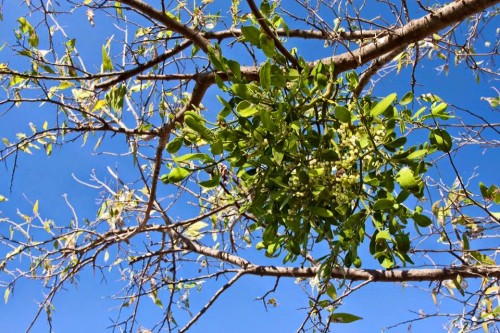 I’ve been trying to come up with some Christmassy flora and fauna facts: in the past I’ve done holly and covered ivy.

Then the thought came to me that we don’t get much mistletoe growing round these parts.

By coincidence we’ve currently got a couple of mistle thrushes which have been hanging about and presumably roosting in a large holly tree in the garden. A pair nested in there a few Springs ago and reared chicks until one evening whilst we were sipping tea (or something) in the garden, a sparrowhawk spent half an hour raiding the nest and taking the nestlings individually, returning at five minute intervals for another one whilst the parents created around them.

Mistle thrushes, bigger, greyer and more timid than their song thrush cousins are generally early nesters, and the parents often do their singing (a sad, plaintive, and tuneless song) in rainy and windy conditions – often when nothing else is singing. This has led to their evocative country name of ‘stormcock’.

But let’s get back to the word…mistle…what does it mean?
According to one source it just refers to what we call drizzle – fine misty rain – and this does fit with the thrush’s singing habits.

However another, more likely definition informs us that ‘mistletoe’ has an Anglo-Saxon origin meaning ‘dung twig’ (mistel=dung and tan=twig).

Mistle thrushes love to eat mistletoe berries, the seeds of which pass through them and are deposited on twigs, leading to the plant growing as a parasite among the branches of trees (particularly fruit trees).

Just to conclude with something completely different, demonstrating how useful it can be to know a little bit about trees: Back in the 1970’s, when Foy’s fruit shop was on Market Street they used to display their Christmas trees for sale on the pavement outside the shop. One of the non-dropping kinds (they were rare then) had clearly been ordered by the Royal Oak pub next door and was labelled as such. Anyhow this good friend of ours, needing an Xmas tree (she shall remain nameless), popped into Foy’s and asked Colin if she could have one of those Royal Oaks like the one outside.