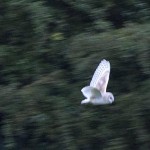 One thing leads to another.

I don’t know whether you saw it, but last winter I posted an entry about the large number of field voles there were in rough pastureland around town (increases like this are called ‘explosions’ and a similar thing occurs with lemmings – close relations – in Northern Europe).

Well it might just be a coincidence, I doubt it, but this summer for the first time for at least thirty years we’ve had a resident pair of barn owls hunting in the Sett Valley.

They have been present occasionally on the far-flung outposts of town I’m told, but it’s the first time here.

I’ve spent almost every evening (yes, I’ve been missing Coronation Street) with the binoculars watching these magical birds, appearing white, which are particularly active as the light begins to fade, flying slowly and listening for the movements of small mammals in the long grass, hovering, and dropping silently on their prey.

They fly quite gently when hunting, appearing moth-like and when hovering over an interesting spot they really focus their attention on the spot and drop silently.

I’m not convinced that they have been breeding here (after a successful kill they appear to fly off back to base with their prize) but there has certainly been a pair.

Incidentally, whilst sitting quietly in the same spot, I’ve seen many a fox, a couple of roe deer and rabbits galore.

Barn owls are resident throughout the winter, in fact many perish during long frozen spells, but I’ve not seen ours for three weeks or so now (they may just be hunting different areas…their favourite fields round here have been cut for haylage recently so there’s not so much of the long, rank grassland that there was). Let’s hope they’ve not moved out.

Apologies for the dubious nature of the photographs taken by a friend an I…as the light fails photography ain’t easy and we didn’t want to disturb the birds (I was disgusted by a photograph of an owl published in one of the free Stockport newspapers which used a remote flash right into the bird’s eyes as it landed). 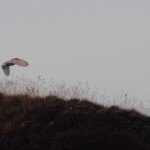 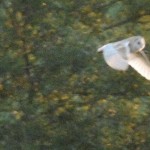