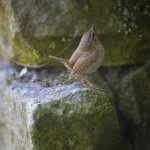 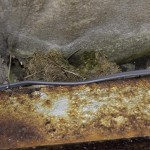 Familiar to everyone the wren is still a favourite of mine…(does anyone else remember them on farthings?)

We’re lucky enough to have a pair nesting in a quiet corner of the garden again this year; they’ve spruced up a nest which was built two years ago, but was left unused last year. Normally the male wren builds six or seven nests, then the female checks them all out, chooses one and prepares it for her eggs.

They lay half a dozen or so eggs which need a couple of weeks to hatch and then both parents share feeding duties.
Incidentally their scientific name is Troglodytes troglodytes…cave dweller, which is pretty apt because they like nothing more than poking around in stony nooks and hollows searching out their main source of food, spiders.

Wrens’ indignant song really does make you feel as though you’re being reprimanded by the little blighters, and it has incredible volume for the size of the bird.

They suffer badly in harsh winters though; spiders are hard to find in February and up to 80% die off, but that’s nature eh?…numbers soon bounce back.