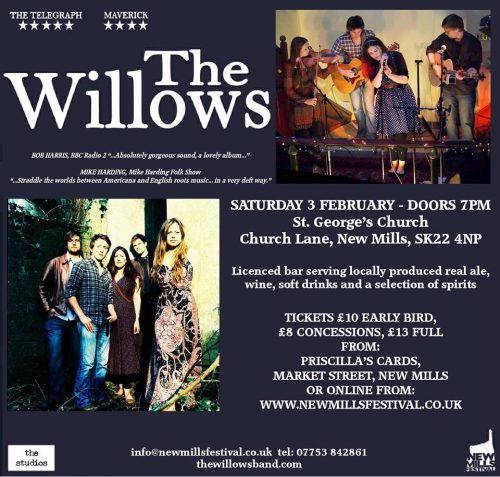 The Willows a folk band hailing from Cambridge, UK. “…straddle the worlds between Americana and English roots music and do it in a very very deft way…” Mike Harding Folk Show “…Absolutely gorgeous sound, a lovely album…” Bob Harris, BBC Radio 2 “… a breath of fresh air to the folk music community… “Maverick Magazine “…outstanding!” The Telegraph, With stories at the heart of the music and the band equally at home with pin-drop intimacy as they are invigorating foot-stompers.

The band will perform for the first time in New Mills at the stunning St Georges Church on Saturday 3rd February. Tickets for the gig are priced at £10 early bird, £8 concessions and are available online at www.newmillsfestival.co.uk or in person from Priscilla’s Hallmark , Market Street, New Mills.

Their first album Beneath Our Humble Soil was nominated for Best Debut in the Spiral Earth Awards 2014. The much anticipated follow-up Amidst Fiery Skies, co-produced with Sean Lakeman was released to critical acclaim, with The Telegraph hailing it “a triumph” in a 5-star review and a place in their folk albums of 2014. Fronted by the breath taking vocals of Jade Rhiannon, supported by rich vocal harmonies and dynamic acoustic musicianship the band take influence from folk traditions on both sides of the Atlantic.