Organisers of a popular New Mills pub quiz group that has donated over £20,000 to local causes are celebrating its third anniversary.

Quizit is the brainchild of New Mills friends Sean Whewell and Tony Audenshaw. They came up with the idea over a pint at The Rock Tavern pub on Wirksmoor Road, and the weekly sessions are due to turn three years old on Monday 5th March.

The events take place at 9pm every Thursday at pubs around the town. Quiz brains pay a small £1 donation, and all the money raised goes to local charities and organisations.

Over the years, Quizit’s have raised a staggering £20,000 for more than 50 community groups including the football club and junior teams, volunteer centre, local schools, annual events and celebrations, such as the Carnival, Christmas lights switch-on, High Lea Park’s One World Festival and the New Mills Festival.

Sean said: “Quizit really has rejuvenated Thursday night as a night to go out in New Mills. With upwards of sixty people attending each Quizit (and sometime 100 people) it has become the ‘don’t miss’ event of the week and has brought together many Community groups who now work much closer together and also venturing into pubs they hadn’t been in for a long time – raising the £20,000 and seeing it used in New Mills is an added bonus to seeing everyone have a great night out ”

Tony added: “New Mills didn’t have a regular light-hearted quiz in any of its venues so rather than moan about it we decided to set one up with the help of four like-minded mates; Frank Seddon, Dave Rose, Chris Todd & Ian Waddell.  Together, we devised a winning format which always stays the same regardless of the Quizmaster. We always welcome new quizzers and value the regular teams who help create a friendly and fun atmosphere.”

The quiz now has more than twenty hosts with locals who started as quizzers and have become Quizmasters. Friendships and networks have grown because of the Quiz bringing this close-knit town even closer. 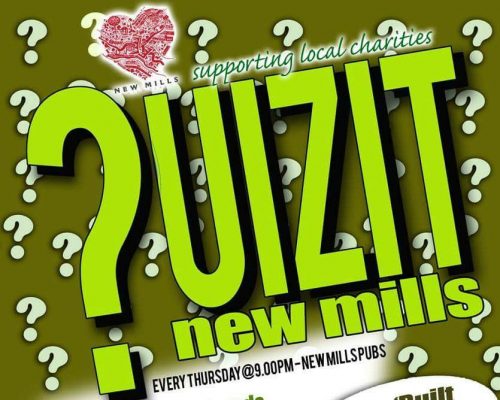 If you think your local group or charity could benefit from a Quizit fundraiser, please email: visitnewmills@hotmail.co.uk