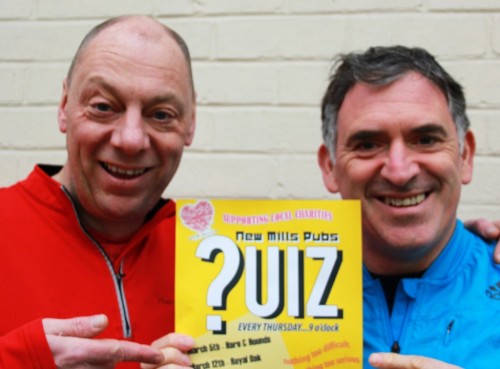 The quiz will visit a different town centre pub each week, at the same time supporting a nominated local charity.

It will take the form of a general knowledge “Bingo” quiz with a picture and music round, where the questions are less “Which bearded French author wrote ‘La Beite humaine’ in 1890?” and more “Which bearded TV sailor started selling fish fingers in 1967?”

It’s just a pound a person to take part and there is no restriction on team sizes, but to make it fair one point per team member will be deducted from the final score.  Half the pot goes to the weekly charity, the other half to the winning team, who can donate their spoils if they are feeling generous.

Tony Audenshaw will be hosting the first of the quizzes at The Hare and Hounds, Low Leighton at 9pm on Thursday March 5th in support of Marple Cancer Charities Committee.

Tony says “The idea is to link in to late night Thursdays and give people an entertaining night away from the telly.  Sharing the quiz between different venues gets people into pubs they might not have visited before.  A few of us will be taking it in turns to set the questions and play quizmaster, so each week will have the same structure, but a different feel.”

Local charities who would like to be chosen to be beneficiaries should email Visit New Mills at visitnewmills@hotmail.co.uk