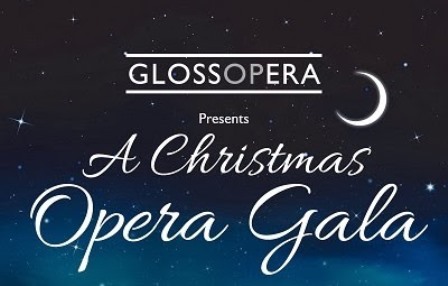 GLOSSOPERA are to return to Spring Bank Arts Centre on Thursday 20 December with their hugely successful ‘Christmas Opera Gala’. GLOSSOPERA was formed in 2013 by the Glossop-based opera singer and artistic director of Glossop Music Festival, Claire Surman, with the aim of bringing world-class opera and lighter classics to the High Peak.

All profits from the performances will be going to local charity ‘Mummy’s Star’ which supports families facing cancer in pregnancy and beyond.  Previous audiences have described the galas as:

‘the highlight of the Christmas calendar’

‘a feast for the ears, eyes and the heart. Top class entertainment’

The gala will feature five professional opera singers, who have performed principal roles with national and international opera companies and orchestras, together with their pianist, Benjamin Powell, principal pianist with the Manchester-based Psappha ensemble.

Claire has sung roles with Glyndebourne and Welsh National Opera, and as a soloist with orchestras including the London Philharmonic Orchestra, Orchestra of the Age of Enlightenment and Berlin Philharmonic.

Catriona has performed with the Royal Opera and Opera North, and career highlights include Adele (Die Fledermaus) alongside Dame Kiri Te Kanawa, Jose Carreras, Alfie Boe and Bryn Terfel at the Royal Albert Hall and gala performances for the Prime Minister and members of the Royal Family.

Manchester-born, Charlotte is a graduate of the Solti-Te Kanawa Academia di Bel Canto, and has performed roles with Glyndebourne and English Touring Opera. She has sung with conductors including Trevor Pinnock, Sir Colin Davis and Sian Edwards, and Vladimir Jurowski and the London Philharmonic Orchestra.

Douglas has performed extensively with Scottish Opera. Other UK highlights include singing at the Aldeburgh Festival.

They will be joined by the tenor, Christopher Turner whose recent engagements include Beethoven Ninth Symphony with the Royal Philharmonic Orchestra at the Royal Albert Hall, Leoncavallo’s Zazà with the BBC Symphony Orchestra at the Barbican, and his debut as Rodolfo with Scottish Opera.

Tickets are available from: Spring Bank Arts Centre, High Street Books in New Mills, and online at https://www.wegottickets.com/event/450307 Tickets cost £15 in advance (£18 on the door), with a student concession price of £12.

Doors will open from 7pm, for more information visit https://www.facebook.com/glossopera/ and www.glossopera.com