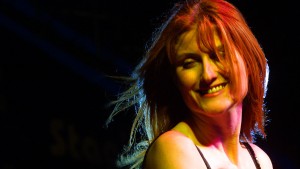 Fresh from performing at Edinburgh’s Hogmanay Street Party on New Year’s Eve, it’s been announced the pop, folk and jazz singer-songwriter will star at the Art Theatre on Friday 24th of July 2015 – tickets still available

The big gig is being organised by community group, Visit New Mills at the Art Theatre which is a beautiful 500 seater venue in the heart of the town centre, the perfect place to host such a unique star. We hope both local and visiting audience members will thoroughly enjoy the evening.

Profits made from ticket sales will towards Visit New Mills, to help promote growth in the community and support local events.

Eddi Reader grew up in Glasgow and Irvine; busking and performing at the local folk clubs there.

In the early 1980s, Eddi travelled around Europe with circus and performance artists before moving to London where she quickly became a sought after session vocalist.

She famously harmonized with Annie Lennox touring with the Eurythmics, after her time with successful punk outfit Gang of Four. It was the short-lived but warmly remembered Fairground Attraction that really brought her into the limelight and to the attention of a much wider audience.

Through these years Eddi based herself in London, but in 2001 she decided to move home to Glasgow where she recorded the classic ‘Songs Of Robert Burns’ album released to international acclaim in 2003.