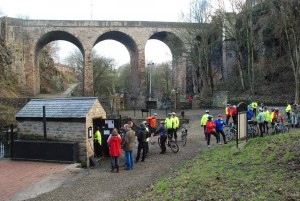 Torrs Hydro is a micro hydroelectric scheme, owned by the community in New Mills.

Since its commissioning in 2008 it has become famous as the first community owned and managed scheme in the UK and has also become a magnet for community events – Youth Festivals, Open Days, Artwork and is visited by many thousands each year.

It is located on the River Goyt, immediately after its confluence with the River Sett at the Torr weir.

A 2.4-metre diameter reverse Archimedes screw capable of generating up to 63 kW of electricity.

Torr weir was built across the Goyt, to provide a head for the Torr Millwhich occupied the same site. Torr Mill burnt down in 1912.

On 20 September 2007 Torrs Hydro New Mills Limited, an Industrial and Provident Society for the benefit of the Community was formed, with shares were offered later in that year. Construction began on March 2008, and on 8 June the screw was delivered. It weighs 11 tonnes. Commissioning started in August and the scheme was handed over on 4 September 2008.

Torrs Hydro is located in the Torrs Riverside Park in New Mills, Derbyshire. This amazing gorge is right underneath the town centre and is easily accessible by train to New Mills Newtown or Central stations, bus or car.

Enter the Torrs Riverside Park from The Rock Tavern (Wirksmoor Road, Newtown), from New Mills Central station via the Millenium Walkway, from Hurst Lea Road, via steps from the town centre at the bus station or Rock St, from Hyde Bank Road and from Church Road adjacent to the entrance to the Co-Op Car Park (Endsor Way on the map).

There are great views of the scheme from the Union Road and Church Road bridges over the gorge.